In the last post, we learned what synchronization is and why we need it in our codes. Then lock and Monitor statements are introduced, and some samples are also demonstrated. The Monitor functionalities are beyond Enter and Exit. In this post, we look over Monitor methods and implement a simple consumer-producer queue.

The purpose of signaling is establishing cooperation among a bunch of threads, where they can notify each other to go ahead and do something or to halt. Imagine a thread that needs to wait for a resource to be provided or replenished; whenever the resource is available, the thread would be informed by other threads and resume its work. It might remind you of the producer-consumer problem in which we have two actors; a producer(provides data) and a consumer(processes data).

As discussed, signaling is a mechanism by which threads interact with each other. In .NET, One of the common ways of implementing signaling is the Monitor static class. The class provides Wait, Pulse, and PulseAll methods for achieving synchronization.

Bear in mind that the above methods are designed for use within lock statements; otherwise, they throw exceptions.

When Monitor.Wait is called, the caller releases the ownership of the lock on the object and goes to waiting-queue until it receives a signal by Pulse or PulseAll from other threads (if there is one) then comes back to ready-queue and also reacquires the lock again. In other words, a thread calls Wait for being alert to changing states by other threads. Note that Wait returns true if it requires the lock unless it never returns.

Let's look at an example:

As you can see, when the Thread 0 comes through the critical section that is enclosed by the lock, a message comes up on the screen that indicates Thread 0 has entered the critical section.. Next, the Monitor.Wait is called and the Thread 0 releases the lock and blocks. Now, the Thread 1 comes to the play and acquires the lock. The same scenario goes on also for the Thread 1 and Thread 2. So far, we have three threads in the waiting-queue and wait forever since there is no thread to send a signal and bring them back to the ready-queue.

As long as the above sample doesn't call Pulse or PulseAll the threads would be blocked indefinitely. To prevent this, You should use the below constructor:

The time-out ensures that the current thread does not block indefinitely.

There are other constructors of Monitor.Wait that are not covered in this post. You can learn more about them here.

Now, what is going to happen after calling PulseAll? Indeed, it tells the CLR that if there are any threads in the waiting-queue, let them resume and bring them back to the ready-queue. In the end, as you can see the result, they are woken up one after another.

So far, we have learned how exactly the Monitor class works. Now let's peak up a challenge and solve it by using Monitor class capabilities.

producer-consumer problem is a pretty common scenario in software development in which there are two types of actor:

Both use a queue or other data structure as a bedrock for storing data jointly. The most challenging thing is synchronization among threads since only one shared resource exists, and race conditions might have happened. 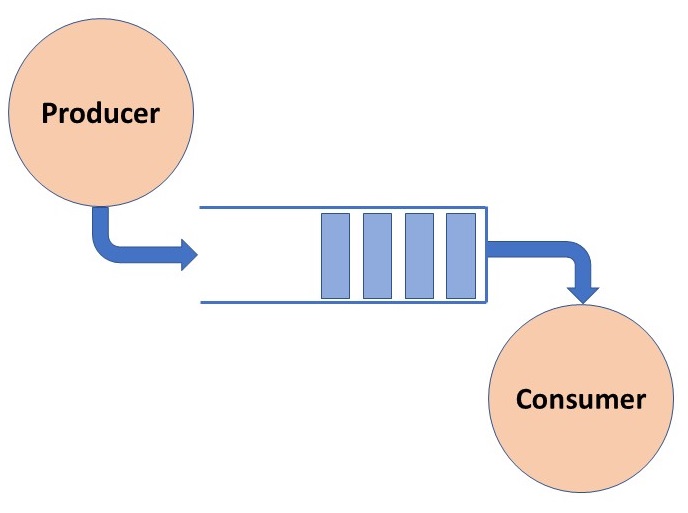 Now, we want to implement a producer-consumer problem by the capabilities of the Monitor class. I chose a bakery as an example in which baguettes are baked then consumed by people. If bread runs out, people wait until trays are refilled.

Let's spell out the code. The Bakery class contains two methods. The first method is the BringBaguette that plays a consumer role and responsible for retrieving an item for processing. The second method is the RefillTray, a producer that accepts a collection of Baguette and Enqueue them to the _baguetteQueue.

The synchronization object in both methods is _baguetteQueue that guarantees only one of them can go ahead at the time. In other words, when the producer is going to add some data to the queue the consumer is waiting and vice versa.

Bear in mind that In order for Wait to communicate with Pulse or PulseAll, the synchronizing object (_baguetteQueue, in our case) must be the same.

The caller sends a collection of Baguette into the method. At the first step of the code, the caller thread grabs the lock then appends the collection of Baguette to the _baguetteQueue. Finally, PulseAll is called, where it sends a signal for releasing all threads that are stuck in the waiting-queue then they are allowed to resume.

The method informs the client by an Action which has been already sent as an argument. Moreover, there is a while loop that iterates until the queue is empty. Whenever the queue is empty the current thread will be locked by calling Monitor.Wait.

This is just a sample for being familiar with the Monitor class and its usages. The producer-consumer problem has a different implementation in .NET. One of the elegant and practical one of which is the BlockingCollection.

In terms of efficiency, Pulse beats PulseAll since Pulse gets only one thread back to life, and the other threads have no overhead on the process. On the other hand, PulseAll kicks all waiting threads into life. In this situation, if there is only one item in the queue, the first thread at the head of the waiting-queue could go ahead, and the rest of them should get back to sleep. Therefore, As you can see the PulseAll works on all threads that may not need to wake up.

Signaling is one way of synchronization by which threads can communicate with each other. When it comes to signaling, the Monitor static class is a viable way for bringing synchronization to our codes. Threads would go to sleep by calling Monitor.Wait and be woken up by Monitor.Pulse or Monitor.PulseAll. The Monitor class is a proper candidate the implementation of the producer-consumer problem in .NET.